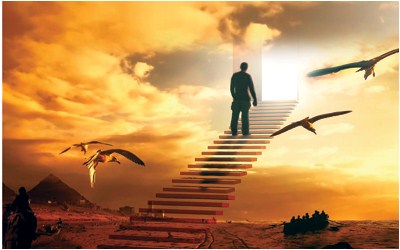 My father went with me on the trip. Our family is from Florida, and in the weeks leading up to the trip, we talked about my parents' memories of enduring weeks of dread during the Cuban Missile Crisis in 1962. My dad was 21 at the time. Given that history, and the fact that Dad doesn't have a socialist bone in his body, I was surprised at how quickly he agreed to go along. We knew we were walking into a history of hostility, and that simply by being Americans, we could be lightning rods for trouble. Overall, I had peace about making the trip, but this was Cuba, and there were times when our planning was tinged with doubts.

As it turned out, the only nervous moments came on the way into the country. When our plane landed, we were met by soldiers wearing olive drab uniforms, just like in the movies. It was a little surreal. In the terminal, our group of five gringos stood out among the other travelers. We were questioned at length by customs officials. We were honest about why we had come, but were evasive about the names of our Cuban contacts and their churches. We were eventually allowed in without incident.

The rest of the trip was a joy. The Cuban believers were passionate, gracious, and hospitable. They have very little material wealth, but they are rich in love and courage. Over the past 20 years, a slow revival has taken place in Cuba, beginning in the eastern provinces. Thousands have come to faith. They both needed and appreciated our teaching and encouragement.

The U.S. government, however, does not want Americans to go to Cuba. The primary rationale, as I understand it, is that they don't want American money propping up Castro's communist regime. In order to go legally, we had to get a license from the U.S. State Department. Licenses are granted for just a handful of purposes, among which are to engage in full-time religious, athletic, or educational activities.

U.S. citizens who travel to Cuba without a license may face a hefty fine when they return. The same year we went, another Christian group was threatened $34,000 fine for misuse of their license. It was alleged that they did not engage in full-time religious activities while in Cuba. The case was later dropped.

Cuban officials, however, are cautiously open to visits from Americans, even evangelistic visits. They want Americans and their money to come to the country. In customs, one of the questions I was asked was how much money I brought with me. Around Havana, I saw several billboards calling for an end to the embargo.

When we contemplate traveling to where our own government does not want us to go, it prompts questions of identity. Where do our ultimate allegiances lie? Who do I really belong to, Jesus or Uncle Sam?

Three years earlier, I spent several weeks in the suburbs of Paris, ministering among North African Muslim children. This was only months after 9/11. When the children learned we were Americans, they immediately started poking at our political nerves. Several of them chanted, "Bin Laden! Bin Laden! Il est mon pere!" ("He is my father.") One Muslim man, maybe 25 years old, gazed provocatively at me and said, "Vive Saddam Hussein." The worst was a small boy with a huge grin on his face who mimed planes crashing into the World Trade Center and the collapse of the towers.