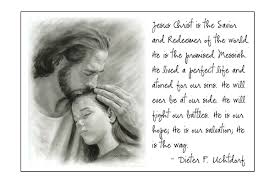 Jesus has been given the title of The Great Teacher by many people who have studied and applied his teachings throughout history. The surprising thing is that Jesus was not the typical philosopher or preacher that people were used to. Unlike some other people Jesus tried to make his advice understandable to the common man, sometimes using stories or symbols, but always keeping his message simple, straightforward and practical.

Jesus dealt with many aspects of human life but the one that he spent longest on was the need for love. His focus was not just on the love for our friends and family, but something much more challenging, a love that tests every nerve and sinew.

"Love your enemies, bless them that curse you, do good to them that hate you, and pray for them which despitefully use you, and persecute you." (Matthew 5:44) more...

It is the easiest thing in the world to hate, to let the desire for revenge grow in our hearts. Indeed vengeance may even have the shadow of justice attached to it, but in reality it leads to dark, unadulterated hate and a spiral of destruction.

To be truly happy we must rise above the bigotry and jealousy of others. We must love even if we are hated for it. Love and do not hate, for surely love is the only path to peace, freedom and happiness.

There were many people Jesus met who seemed holy in front of others but who acted very differently when there was no-one watching. For Jesus it was no good just pretending to love others, or pretending to control our selfish instincts, we had to truly feel it in our hearts.

"You have heard that it was said, 'Do not commit adultery.' But I tell you that anyone who looks at a woman lustfully has already committed adultery with her in his heart. (Matthew 5:27-28) more...

What we think in our hearts makes us just as guilty as those who commit their sins in daylight. Each of us are careful to appear respectable in front of others, but how many of us would dare to say that our hearts are pure?

If only the world could rid itself of its hypocrisy then people may truly become good rather than just trying to appear so. It is a challenge which each of us must face every hour of every day for the temptation to be otherwise is overwhelming.

Without this sincerity, without this trust, no man can achieve anything worthy of note. It is only sincerity that can inspire men to greatness, that can make heroes who stand up for truth, liberty and justice.

For Jesus it was important not only that we try to reach these standards of love and sincerity but also that we realise the occasions when we do not. Once we have understood what we have done wrong we can ask for forgiveness, and then make a serious effort to correct our mistakes. It is only when we do this that we can truly be a follower of God.

To some who were confident of their own righteousness and looked down on everybody else, Jesus told this parable: "Two men went up to the temple to pray, one a Pharisee and the other a tax collector. The Pharisee stood up and prayed about himself: 'God, I thank you that I am not like other men--robbers, evildoers, adulterers--or even like this tax collector. I fast twice a week and give a tenth of all I get.'

"But the tax collector stood at a distance. He would not even look up to heaven, but beat his breast and said, 'God, have mercy on me, a sinner.'

"I tell you that this man, rather than the other, went home justified before God. For everyone who exalts himself will be humbled, and he who humbles himself will be exalted." (Luke 18:9-14) more...

The forgiveness of our sins is not without a cost because when we break laws, whether they be civil or divine, we should expect to face some consequences. However the price of our forgiveness was paid in a remarkable, symbolic way when Jesus suffered and died in our place. He explained this sacrifice by using bread and wine as symbols of his body and blood.

While they were eating, Jesus took bread, gave thanks and broke it, and gave it to his disciples, saying, "Take and eat; this is my body." Then he took the cup, gave thanks and offered it to them, saying, "Drink from it, all of you. This is my blood of the covenant, which is poured out for many for the forgiveness of sins. (Matthew 26:26-28)

All of the followers of Jesus are joined together in a mystical union to make up one body, of which Christ is the head. When Jesus died it was like this whole body of believers died in him, and so his death becomes a meaningful sacrifice for the wrong doing of all believers.

We must humble ourselves in a way that allows us to truly understand what we have done, what we deserve, and what Jesus gave up so that we could be free. When we do this we will finally realise how much God has done for us.

Having shown men how they should live loving, sincere, humble lives, Jesus also began telling them about how they should think of God. Within each of us there is something that tells us there is a God, some kind of higher power, some force governing the world, yet it is beyond our understanding as to what exactly this Being is.

Jesus tried to reveal this higher power to us in a very simple, yet a truly radical way. Jesus told us to think of God as our Father, as a loving, kind, generous parent who has given us life and will provide for us in the times ahead.

Jesus' relationship with the Father was unique as his Spirit was divine, but we too can be children of God. This way of thinking about God changes our whole conception of life. It give us confidence and strength during even the toughest times, and comforts us in the moments of despair.

Jesus' teaching on the Heavenly Father was a truly revolutionary step forward in philosophy and religion. By thinking of God as our Father we can face the world with confidence knowing that He will work everything out for the best. However it also places on us the responsibility of living as the children of God, a truly great family that we must never bring shame upon.

This has been just a short overview of how Jesus' wisdom earned him the name of the "Great Teacher" by many other wise and insightful men. Yet there is even more to Jesus than his wisdom.

Jesus was more than just a teacher, he was also unique in his nature. He united the essence of God and man within himself, being both divine and human. This meant he could be a unique mediator between the Father and mankind, with his death allowing us to be reconciled with God.